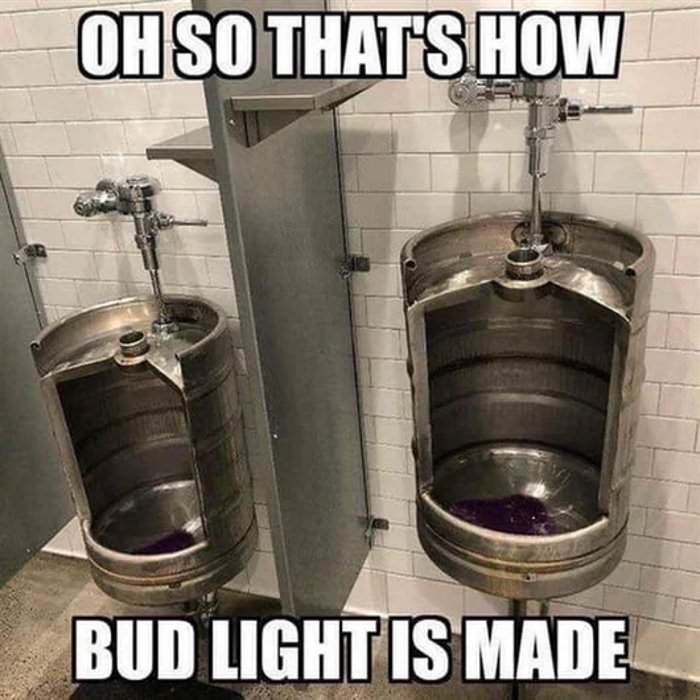 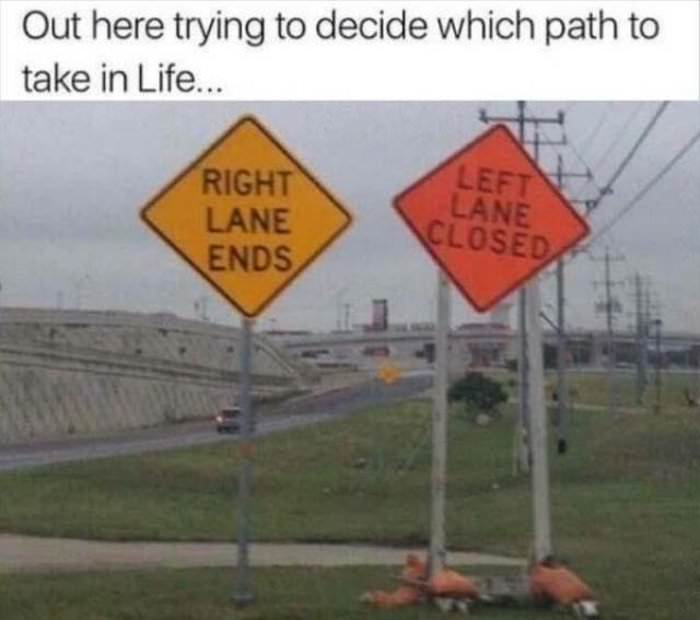 TOPPING 2 million copies sold in just a matter of weeks, the former First Lady Michelle Obama’s memoir is striking a chord with readers on an unprecedented level as she rethreads almost every important moment in her life bar the slaughter of innocent civilians via US drone strikes.

The engaging intellectual who suffered horrendously racist barbs from right wing zealots during her time as First Lady chose to skim over the part where her husband, then President Barack Obama, redefined ‘enemy combatants’ as ‘civilian men over 16’ in a transparent bid to disguise the murder, via drones, of innocent people who had no involvement in terrorism and were dubbed ‘collateral damage’.

The compassionate, bright and refreshingly candid ceiling-breaking Chicago native has topped the bestseller lists around the world with her memoir which does not touch upon whether or not her marriage was tested or her view of her husband changed in any way after observing his decisions to order drone strikes on weddings in Middle Eastern countries, resulting in the deaths of innocent men, women and children.

An eye-opening account of her life from page one, the Harvard Law graduate’s memoir, packed with wit, is connecting with and inspiring countless people as her life in and out of the White House proves an enthralling read; her outsider’s view of her husband’s 8 years in power not stretching to weighing up the morality of obliterating the bodies of normal people going about their daily lives.

Becoming will top readers’ choice for ‘must-buy’ book in the run up to Christmas as they seek to gain an insight into Obama, who comported herself with dignity and grace while in the White House and subsequently went light on the details of the over 800 innocent civilians killed by drone strikes ordered by her husband.

Responding to claims that political memoirs are always a self-serving, reputation enhancing endeavour which are light on details apart from allusions to ‘tough decisions’ Obama fans have defended the book.

“I didn’t buy the book to discover how morally corrupt the exalted heights of US politics is, and how people have blood on their hands and refuse to be drawn into answering questions on morality when it paints them in a bad light, I’m just here to feel empowered,” confirmed one avid Michelle Obama fan.

“I want to hear about how tough the toll of seeing children die in US mass shootings was, not children dying in US mass droning of the Middle East”. 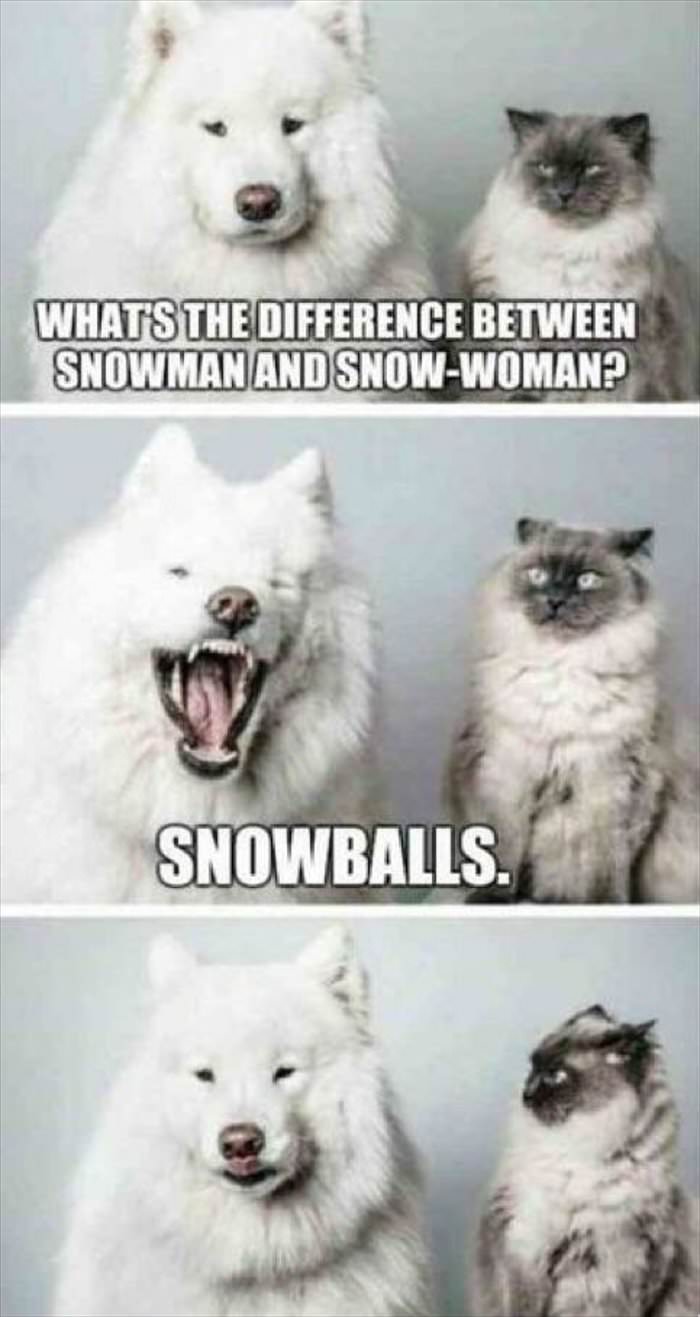 Bank Of England Advises Britons To Melt Down Their Gold Fillings

OUTLINING the best case scenario in the event of Brexit occurring the Bank of England has advised Britons to melt down their gold fillings if they have any, as sterling will be rendered worthless as Britain looks set to lovingly recreate Mad Max Fury Road after the 29th March, 2019.

“It’s not all doom and gloom as some of you reading this economic forecast will die immediately because there will be no medicine, thus avoiding having to fight for food in Fight Clubs organised by visiting Chinese tourists who are on a ‘human poverty safari’,” confirmed head of the Bank of England, Mark Carney.

Speaking plainly about the potential fallout from a ‘disorderly, no deal Brexit’ Carney claimed GDP could fall by 8%, according to a worst case scenario.

Inflation could surge to 6.5% with the unemployment rate rising to 7.5%, while interest rates would rocket as high as 5.5% and house prices forecasted to decline by 30% on current value.

“This is typical of the big brained ‘elites’, using their ‘education’ and ‘degrees’ to ‘correctly forecast’ and ‘research’ the ‘fallout’ from a monumentally stupid and self inflicted Brexit,” confirmed Brexiter Nigel Farage, making his bi-minutely appearance on British TV and radio.

“Oh and give me all your money, this is a robbery,” Farage concluded.

There has been pronounced outrage at the Bank of England for not openly lying about how post-Brexit, the Empire will be restored to an imagined former glory and pots of gold will be placed on everyone’s doorsteps.

“Once again, yes, if you had enough gold fillings, then technically you could fill a pot with it. But you’ll need that gold to pay for safe passage out of the country in the next few years to somewhere with a stronger economy, like Zimbabwe,” concluded Carney. 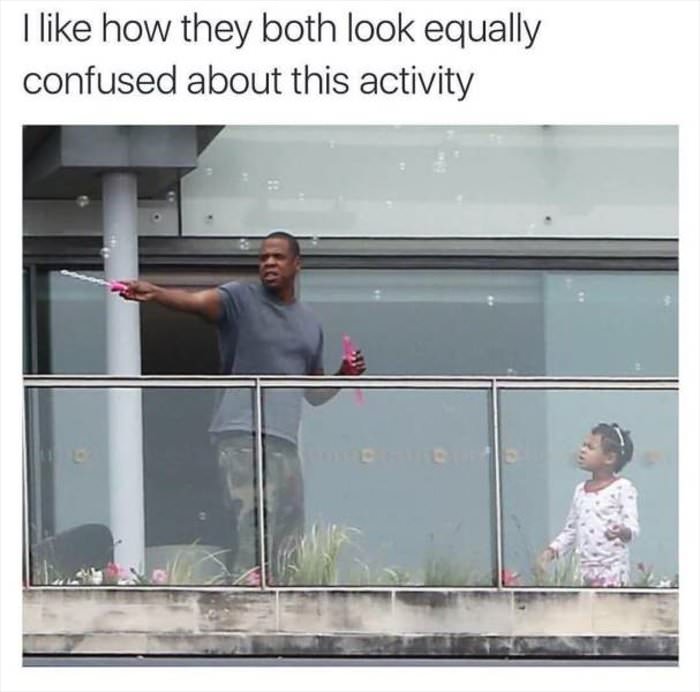 A 9-year-old girl wrote a letter to NBA star Steph Curry pointing out that his shoes do not come in girl sizes, and not only did Curry respond, he made a change. 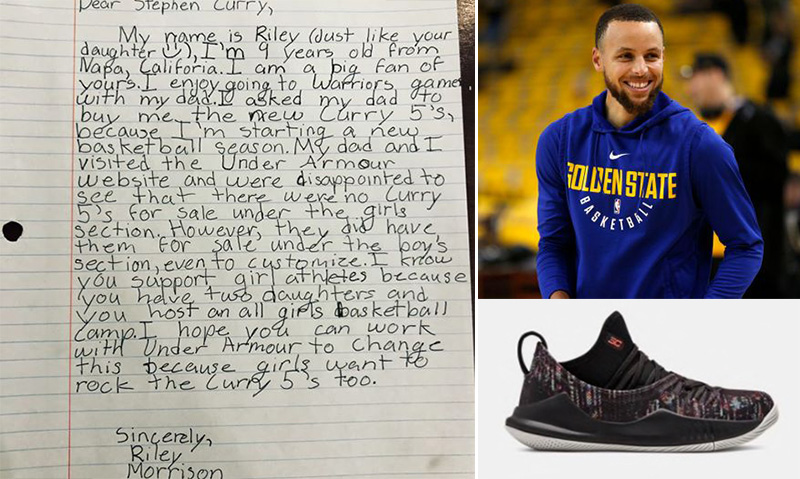 Riley Morrison wrote in her letter that she's a big fan of the Golden State Warriors point guard and she wanted a pair of Icon Curry 5 sneakers, but when she visited the Under Armour website to buy them, she didn't see them listed under the girls' section.

My name is Riley (just like your daughter), I'm 9 years old from Napa, California. I am a big fan of yours. I enjoy going to Warriors games with my dad. I asked my dad to buy me the new Curry 5s, because I'm starting a new basketball season. My dad and I visited the Under Armour website and were disappointed to see that there were no Curry 5s for sale under the girls section. However, they did have them for sale under the boys section, even to customize. I know you support girl athletes because you have two daughters and you host an all-girls basketball camp. I hope you can work with Under Armour to change this because girls want to rock the Curry 5s, too.

On Thursday, Steph Curry tweeted the handwritten note that he sent Riley in response. 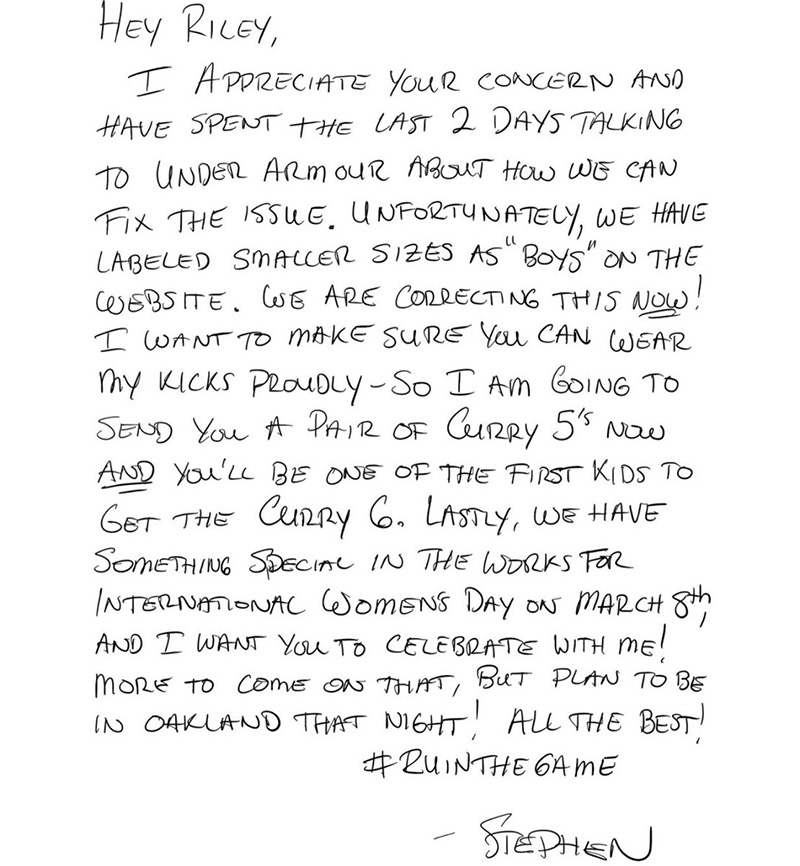 He said he has now worked with Under Armour to put them in the girls section too, and sure enough the shoes are now there. 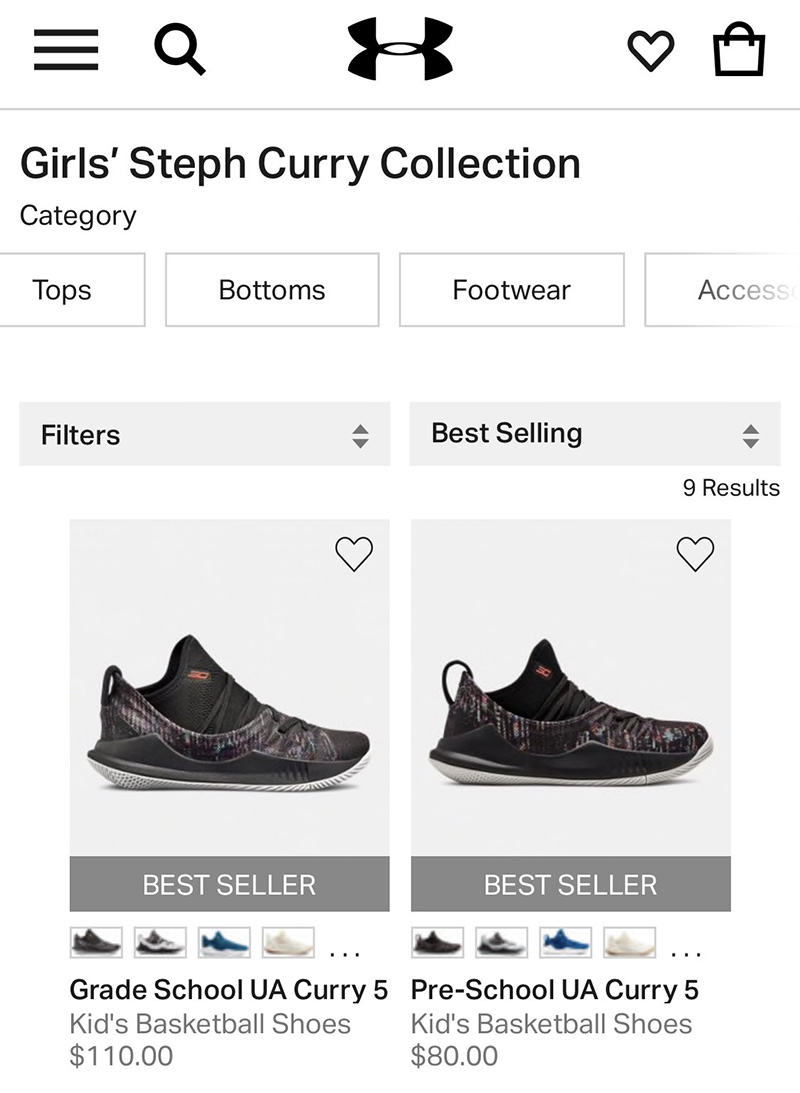 Curry has been an outspoken advocate for women's rights, writing earlier this year, "I want our girls to grow up knowing that there are no boundaries that can be placed on their futures, period."

UPS Driver Adopts Shelter Dog Who Jumped Into His Truck

A UPS driver in New York was making the rounds when a dog from the Buffalo City Animal Shelter hopped in his truck and "didn't want to leave." 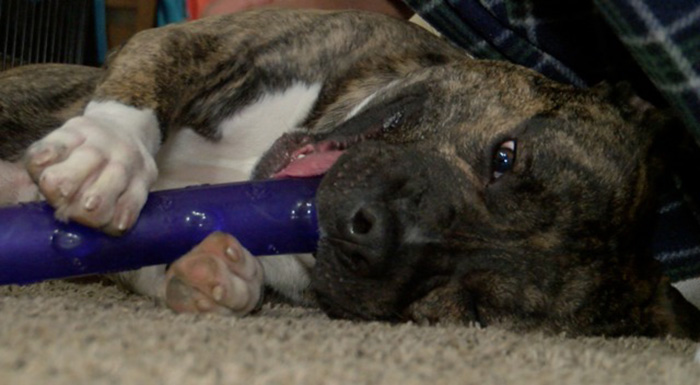 Jason Coronado says the pitbull-terrier mix made an impression on him and he could not stop thinking about the dog after he left to continue his route.

"He hopped up and just sat there and did not want to leave," Coronado told WKBW.

Two days ago, Coronado went back to the shelter and adopted Ernie.

"He is probably my idea of a perfect dog," Coronado said. "I wanted him to have a good home."

A Butte County Sheriff's deputy, his wife and two small children who lost their home in the Camp Fire now have a place to stay, thanks to a generous donation from strangers.

"There is a Santa!

On Monday my boss informed me we were getting rid of a used trailer that we no longer needed.

His wife suggested we donate it to a victim of the Paradise Fire (450 miles away).

I started a search but I could not tell a real need from a scam (people are sick). Who knew it would be so hard.

On Tuesday I suggested we donate it to a first responder. So I called the Butte County Sheriff Dept. and told them what was up.

Within a couple of hours I was connected to a young officer who had a wife and two small children. They had lost everything.

Now, the question was, how do we get this rig up there – fast.

Yesterday I called friends with both the Los Angeles Police Dept. and Sheriff's Dept, and within 1.5 hours I had officers from both departments offering help.

At 3:00 yesterday afternoon the two off-duty Deputies showed up in a truck they had to borrow from a local business.

They were prepared to make the 900 mile trip (a brother needed help). They also showed up with two big bags of new toys for the kids.

It was also decided we should leave everything in the RV (pots, dishes, etc) and let them decide what they could use and donate the rest.

Some days I love my job!

It's been a tough few weeks here in California. This is just our way of saying thank you to all the first responders who are standing the watch.

I left names off this post, but you know who you are.

Especially Santa's wife, it was her idea!!!

And at 6:30 this morning the two deputies were home taking a nap before their next shift.